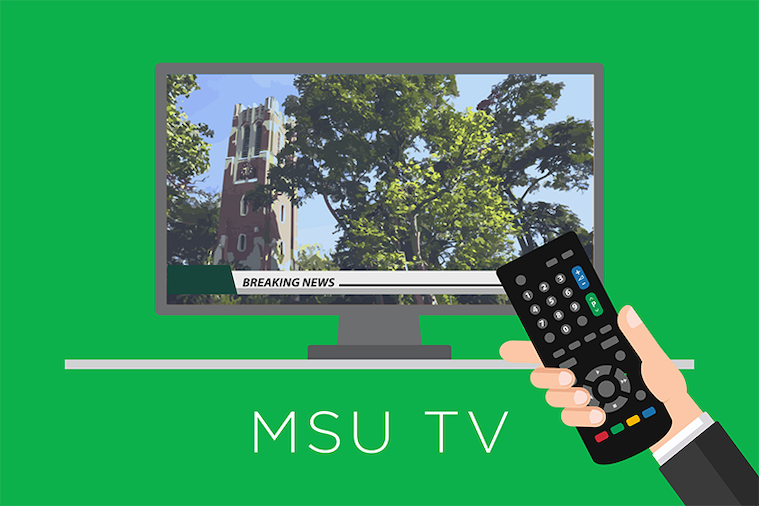 When freshmen moved into their dorm rooms and set up their TVs this year, the default channel wasn’t MTV or ESPN. It was MSU TV, a new channel created through a partnership between ComArtSci and the Residential Halls Association (RHA).

RHA used to have their own channel that showed movies, but it’s been off the air for several years. Troy Hale, a professor of practice in the School of Journalism, was inspired to resurrect it. After discussing the idea with RHA, he brought in Brian Kusch, a broadcast and systems information engineer, to help upgrade the old channel’s equipment and move it to ComArtSci.

Hale knew the task of bringing MSU TV to life was no small feat, so he began looking for students to help. Media and Information senior Zoe Kissel and junior Elizabeth Keller stepped up to the plate, and are now serving as student leaders for the channel.

“When we sat down with [Kissel and Keller], we told them ‘We’re older, we don’t really know all the cool stuff’,” said Hale. “This is a brand new station, and you can come up with any crazy idea you want to. Because we’re still in the testing stage, we can put it on the air and see what works and what doesn’t.”

When Kissel and Keller aren’t designing the channel’s programming and branding, they work to recruit students and hear their pitches for shows. Their vision is to create inclusive programming where everyone can find something they will enjoy, with topics spanning from sports to academic research to short films.

“I think MSU TV has great potential to connect students across campus and create unity throughout the student body,” said Kissel. “We want to involve students and programs from all of MSU’s colleges to create a channel that really feels like it was made for Spartans.”

MSU TV’s hardware may live in ComArtSci, but all MSU students, faculty and staff are encouraged to get involved in the channel.

Though the channel is still in its infancy, the team has big dreams for what it could become for the university. They envision that the channel will inspire all Spartans to think creatively and learn how to bring an idea to life.

For students, there are plenty of opportunities to get involved and gain experience outside of making a show or movie. As the channel grows, there will be a need for graphic designers, program managers and students skilled in organization and scheduling.

“It doesn’t really matter what job you go into, you’re always going to have to come up with a plan and pitch ideas,” said Kush. “It’s not just about TV work; it’s about life skills.”

Tune into MSU TV now on channel 18.1 from anywhere on campus.