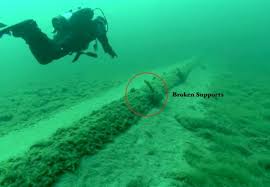 Stories are powerful. They open eyes, break hearts and change lives. They can offer a new perspective and introduce you to someone you’ll never actually meet. A story told effectively can change the world. Immiscible: The Fight Over Line 5 is one of those stories. It’ll give you chills, make you angry and open your eyes to a controversy you might not know existed.

Equipped with cameras, microphones and money for gas, four students brought awareness to a story that needed to be told. Immiscible is the work of Daniel Stephens, Olivia Dimmer, Austin Torres and Annette Kim. Though the film started as an assignment for MI 411 Documentary Design and Production, it’s making quite the splash outside the classroom.

Potential for Disaster
Enbridge Energy’s Line 5 is a 6-decade-old oil pipeline running under the Straits of Mackinac. You might know Enbridge for their previous oil spill in 2010 that contaminated the Talmadge Creek in Calhoun County and flowed into the Kalamazoo River. Many are worried about the possibility of it happening again in the Great Lakes.

“The campaign to decommission Line 5 is building steam,” said Stephens, a Media and Information senior. “The Great Lakes are one fifth of the surface freshwater on the planet, a backbone to Michigan’s economy, a sanctuary to those who live here and use it and a delicate ecosystem.”

Taking the Plunge
The students had only a single semester to complete Immiscible. The first month was spent discussing, researching and planning. They attended the Pipeline Safety Advisory Board meeting where they heard passionate comments from environmental specialists and lawyers, natives, straits homeowners and an oil spill first responder.

Over the next two months, the students reached out to various individuals, gained on-camera interviews and attended political meetings and protests. They traveled to Traverse City, Peshawbestown, Leland, Mackinac City, Ann Arbor and Kalamazoo. The final three weeks of the semester were spent editing.

“It takes about an hour to edit a minute of footage, and this is a 46-minute film,” said Stephens. “Between sorting through several hours of footage, laying it out in a timeline, collaborating in editing sessions with the group, finding and adding music, color correction, fine edits and transitions, it is safe to say a few all-nighters were pulled during this final process.”

Staying Afloat
This documentary started out as a way to bring public awareness to an environmental issue, but became less about finishing a class project and more about giving a voice to a major issue and the people it affects.

“As the filmmaking progressed, we started meeting all these incredible people fighting to protect the Great Lakes,” said Kim, a Neuroscience graduate. “I am grateful to have been able to hear their stories and share them to bring awareness.”

Many of the individuals featured were so thankful for the chance to share their story that they returned the favor by providing the students with dinner or giving them tours of the town.

“It was inspiring and humbling to be invited into the homes of these people who hardly knew us, yet trusted us enough to tell their story,” said Dimmer. “I will forever be grateful to all the people who took part in our film and let a scrappy crew of college students commandeer their offices or living rooms as we asked them about this dangerous pipeline and how it threatens their lives.”

Making Waves
This crew of students has taken their work far beyond the classroom. Following the documentary’s debut at Studio C! in Okemos, they were approached by a HopCat representative interested in a fundraising event.

“HopCat’s Kalamazoo, Grand Rapids and Detroit locations screened our film and held a panel discussion with members of the community in those cities,” said Dimmer. “Our film was also screened in a Patagonia store in Chicago as part of the same promotion and fundraiser.”

Immiscible was also an official selection at the Traverse City Film Festival, where it was featured along with a handful of other MSU student work.

How to Dive In
Stephens has some direction for anyone looking to get more involved in the Line 5 issue.

“The first thing people can do is a simple act of spreading awareness by having a conversation with those who don’t know about Line 5,” said Stephens. “There are a number of organizations that are dedicated to this fight. You can go to their website to educate yourself: www.flowforwater.com, www.oilandwaterdontmix.org, www.straitspeace.org and www.enbridge.com/Line5. Be sure to evaluate both sides of the issue before coming to a consensus.”

You can follow all of these groups on Facebook, as many of them host public gatherings where you can send postcards to the governor and attorney general. People can also attend Pipeline Safety Advisory Board public meetings.

“Get informed on your politician’s platforms and vote accordingly,” said Stephens. “The most powerful voice you can have is through your vote.”

Introducing MSU TV: A Channel Made for Spartans