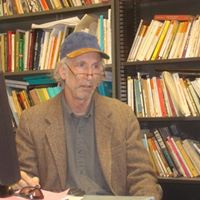 Kenneth Harrow is Distinguished Professor of English at Michigan State University. He received a B.S. from M.I.T., a Master’s in English from NYU and a Ph D in Comparative Literature also from NYU. His work focuses on African cinema and literature, Diaspora and Postcolonial Studies.  He is the author of Thresholds of Change in African Literature (Heinemann, 1994), Less Than One and Double: A Feminist Reading of African Women’s Writing (Heinemann, 2002), and Postcolonial African Cinema: From Political Engagement to Postmodernism (Indiana U P, 2007).  His latest work, Trash! A Study of African Cinema Viewed from Below, was published by Indiana University Press in 2013. He has edited numerous collections on such topics as Islam and African literature (including Faces of Islam in African Literature,1991), African cinema (including African Cinema: Postcolonial and Feminist Readings, 1999), and women in African literature and cinema.  He has published more than 50 articles and a dozen chapters. He has organized numerous conferences dealing with African literature and cinema. He served as President of the African Literature Association, and was honored with their first Distinguished Member Award. He has also been honored with the Distinguished Faculty Award at Michigan State University. In 2011 he was awarded the Distinguished Africanist Award at the Toyina Falola Annual Conference, University of Texas.

He was an NEH Younger Humanist Award recipient in 1973-4, which brought him to France, Algeria, and Morocco. His Fulbright teaching and research awards brought him to Cameroon in 1977-79, and Senegal from 1982-3 and 2005-6.

African Cinema: From the Political to the Postmodern, Bloomington, IN: Indiana University Press, 2007.

“Do We Still Have Postcolonialism?” on the blogsite of Ikhide Ikheola Dec. 23, 2012, reprinted on http://www.sarabamag.com/