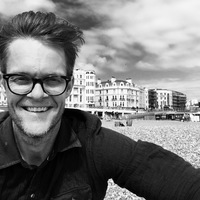 Professor Nieland’s approach to the aesthetic and political cultures of modernism is international and interdisciplinary. He is completing a new book project titled Happiness by Design: Modernism, Film, and Media in the Eames Era (under contract with the University of Minnesota Press). The book explores the transformations of modernism at midcentury through the film and media experiments of the designer, a profession with a new global prestige and world-historical mission in the Cold War period. The midcentury has often been viewed as the moment of modernism’s institutionalization, and the domestication of its utopian demands on the senses. This book, by contrast, traces a vital midcentury modernism that used film and moving-image technologies as the very media of happiness, central to the future of liberal democracy and its technical management. Being happy demanded new things, but also vanguard approaches to work and play, consumption and pedagogy, communication and knowledge production.  Assuming public roles worldwide as the face of the American Century’s exuberant material culture, designers became master communicators in an era that understood multimedia education as the lifeblood of happiness and the guarantor of a human-scale modernism.

His first book, Feeling Modern: The Eccentricities of Public Life (University of Illinois Press, 2008), offered a revisionist account of the public work of modernist affect, ranging widely across the fields of early twentieth-century literary history, film studies, and art history. Tracking modernism’s ambitious designs on feelings as public products of early twentieth-century modernity, Feeling Modern argues that modernism’s achievement lay in its artful refashioning of public experiences in which the feelings would live a mediated life, producing strange new varieties of intimacy, sympathy, and laughter. He is also the author of Film Noir: Hard-Boiled Modernity and the Cultures of Globalization, with Jennifer Fay (Routledge, 2010), a book that traces film noir’s emergent connection to European cinema, its movement within a cosmopolitan culture of literary and cinematic translation, and its postwar consolidation in the US, Europe, Asia, the Middle East, and Latin America. More recently, he has completed David Lynch (University of Illinois Press, 2012). His book casts this iconic filmmaker as an interior designer, a lyric archivist of affect, and an anthropologist of untimely organisms. Professor Nieland’s study discusses the range of modern design idioms that inform Lynch’s famously cinematic interiors, his work’s acute attention to the shaping of affect in particular media environments, and its insistence on the strangeness of biology lived through media. He is co-editor of the Contemporary Film Directors series at the University of Illinois Press.

Professor Nieland’s scholarly work has also appeared in Modernism/Modernity, NOVEL: A Forum on Fiction, Modernist Cultures, the African American Review, and The Blackwell Companion to the Modern American Novel.

“Postindustrial Studio Lifestyle: The Eameses in the Environment of 901,” in The Studio: Space, Form, Materiality, ed Brian R. Jacobson. Under contract with the University of California Press.

“Midcentury Futurisms: Expanded Cinema, Design, and the Modernist Sensorium,”Affirmations: Of the Modern 2:1 (December 2014): 46-84.