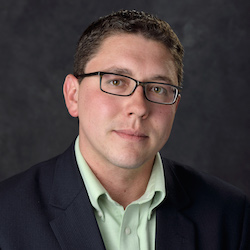 Jon Whiting is an Emmy Award winning television producer and professor of practice in the Department of Media and Information at Michigan State University, charged primarily as an instructor for audio production courses in the department. He also works on video series and specials for WKAR-TV. Jon’s previous experience on campus consists of work with the College of Music, National Superconducting Cyclotron Laboratory, the Center for Systems Integration and Sustainability, WDBM-FM, and MSU Extension. He is a member of the Michigan Association of Broadcasters Foundation Board of Directors, Mott Community College Music Recording Advisory Committee and CCRESA Advisory Committee.

Jon has also received numerous awards and a scholarship from the Michigan Association of Broadcasters. Professionally, Jon has worked regularly with non-profit organizations in Michigan, implementing media production efforts ranging from still graphics to audio and video productions. He has worked on multiple documentary and short films in capacities of producer, editor, videographer, and audio production. Jon regularly presents at media conferences and workshops, including the annual Michigan Interscholastic Press Association’s Fall Conference, the 168th Meeting of the Acoustical Society of America, and the 2014 Sharing Science workshop at the Wisconsin Institute for Discovery. Jon’s specialty focus is the optimization of quality and price ratios in media production.