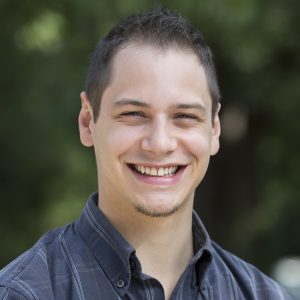 Zach Hall is an alumnus of the College of Communication Arts and Sciences, graduating in 2012 with a degree in Media Arts and Technology. Currently, he serves as a the Videographer and Editor for the Broad College of Business’ Marketing and Communications team, while also serving as the instructor for the course “Live Event Production for Broadcast”. This course takes students out of the recording studio and into the field, broadcasting various live events on the Michigan State University campus. One broadcast, the 49th Annual Spartan Stampede, received a 2018 National Academy of Television Arts and Sciences Student award for Live Sports Events Coverage.

Zach’s passion is in live multi-camera production. Since 2008, he has worked for Spartan Vision, directing live big screen content for Michigan State Athletic events such as men’s basketball and football. He also has worked sports broadcast productions with Fox Sports, Big Ten Network, and MHSAA.

In 2017, Zach became the faculty/staff advisor for the student organization MSU Telecasters. MSU Telecasters is the second largest student group on campus, and is made up of students who conceptualize, write, film and produce seven different television shows from scratch across six main shows. The shows range from comedy to drama, satirical journalism to music videos, and live-production to film style production. Zach Hall’s goal is to connect and guide students to skills and experiences that will give them powerful advantages in the professional video world.