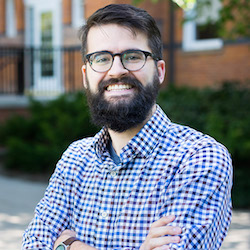 Peter Johnston is the Digital Media/Film Production Manager in the Film Studies Program at Michigan State University and holds a B.F.A. in Photography from Alma College and an M.A. in Digital Media Technology from MSU. Peter has directed, produced, filmed and/or edited a variety of short fiction, documentary and experimental films, including a new short documentary about DACA recipients at MSU. His other work includes Ka-dy Comes Home, Hmong Memory at the Crossroads, Migrations of Islam, Within, and On the Open Road.