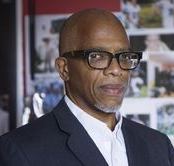 The Evolution of Bert (2014) premiered at the 2014 50th Chicago International Film Festival (CIFF) in the New Directors competition. Bert also screened in the Black Perspectives program and was in competition for the Roger Ebert Award at the CIFF. Other films include China (2003) funded by and produced for PBS, The Soul Searchers: Three Stories (2008) and two films in post-production; the concert film BLAT! Pack Live and the short drama Songs for my Right Side.  Films have screened in Chicago, New York, Los Angeles, Zurich and Berlin. China was broadcast nationally in the U.S. during 2003 and 2004. Grants and honors include a PBS/Independent Television Service (ITVS) American Stories III Production Grant, John Anson Kittredge Foundation Fellowship, Art Serve Michigan Individual Artist Award, Ohio Arts Council Major Fellowship, Rockefeller Foundation Film and Video Fellowship nominations and a filmmaker residency at the Wexner Center for the Arts at the Ohio State University.  All films produced by Tama Hamilton-Wray & Jeffrey C. Wray.

Songs For My Right Side – 30 minutes – Post-Production – Digital color
Rodger Smith, a middle-aged writer is in trouble. He has been unfaithful to his wife Josephine and is desperate to win back her trust. A painful mysterious illness afflicting his right side develops and he encountered an undocumented West African migrant in need of his help. While Rodger tries to make sense of it all music is his only solace.

The Evolution Of Bert (2014) – 75 minutes – 16mm black & white
In his last semester, Albert Hightower, a first generation black college student has much on his mind. He is determined to break up with his girlfriend. His history teacher will not give up the ‘A’ he feels he’s earned. Career pressures from home and from within weigh on him. Near past and near future blend in this dramatic, comic, surreal tale of a young man evolving.

The Soul Searchers: (2008) – 50 minutes – 16mm color
Three short films. In Get Thee Behind Me, Jeremiah, aBaptist reared twelve-years-old, is in love for the first time.  As his heart blossoms, the Devil occupies his thoughts interfering with the pursuit of his object of affection Esperanza Diaz. In Two Pink Dots? You Positive? Sarah is having a baby. Fear, dread and wonderment all inhabit the mind of a young woman agonizing over the arrival of a baby she does not want to have. In Middle Skin Hezekiah Blue and Catherine Jones Blue engage in a bitter fight fitting the pattern of their long complicated relationship.

Capstone Narrative Fiction Film I & II
Fiction filmmaking courses offer select upper level students the opportunity to create a 30-minute film using an independent filmmaking approach. Students work from an original screenplay and take on all roles in pre-production, production and post-production. The finished film premieres in the spring and is submitted to film festivals. Capstone student produced films have won several awards: